You're going to learn an easy 3-chord version of Amazing Grace on the guitar. I’ll show you the chords, the strumming, and even a little bonus at the end.
View Course details
· March 17, 2020

You’re going to learn an easy 3-chord version of Amazing Grace on the guitar. I’ll show you the chords, the strumming, and even a little bonus at the end.

I’m going to use a capo to play this song. This makes the song key much better for my voice. I’m still going to call the chords by their shape, but it will sound higher.

For example, I’m using a capo on the 3rd fret. If I play a D chord shape, I’m going to call it a D (even though it’s a different chord because of the capo). I’ll do the same when I talk about frets. If I say the “3rd fret”, I mean the 3rd fret from the capo.

If you have a capo go ahead and use it. If you don’t have a capo you can still watch the video and do everything without it.

How To Play Amazing Grace

This song is going to start with a basic Folk-style D chord:

The second chord might be a new one to you. It’s an A7 chord. It’s almost like an A Major chord but you fret one less note.

You can play it several ways, but this method is easier to get to from the D.

​All of the other strings are open. You can strum the 6th string, but I think it sounds better with the 5th string as the bass note.

A Couple Options for the G Chord

There are several ways to play this one as well. If you’ve been playing guitar for a little bit I’d encourage you to use the four finger G chord. It’s easier than it looks and flows beautifully from the D chord.

The three finger G has an open 2nd string. I find this a bit harder because your ring finger isn’t supporting your pinky.

Now that we have the chords we’ll be using, let’s map out the chord changes. One thing to note is this song is in 3/4 (“three-four”) time. That means there are three beats or pulses per measure. You’d count it like this:

​The emphasis is on the “one” of each measure.

The first half of the verse chord progression is played like this, with each chord being a full measure (three beats):

​The second section (“I once was blind..”) goes like this:

Why Am I Using A Capo?

The main reason people use capos is to easily change keys on the guitar. For me, moving the capo to the third fret makes it much easier to sing Amazing Grace. If I played it without a capo it would be kind of low for my voice.

If you know a little bit of music theory, you might know that we’re actually playing in the key of F with the capo here. It’s much easier to play it with a capo then to play the key of F without a capo.

If this key doesn’t work for you, try moving the capo up and down the neck and see what works best for you.

If you’re ready you can play this with a fingerpicking pattern instead of a strum. The chords stay the same but it has a different feel to it. Check out [7:50] in the video for the bonus pattern and see which version you like best.

That’s it for today. Which version of the G chord do you like the best? Let me know in the comments! 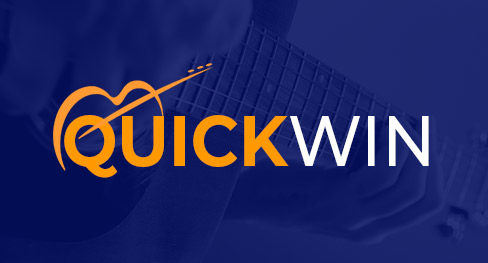